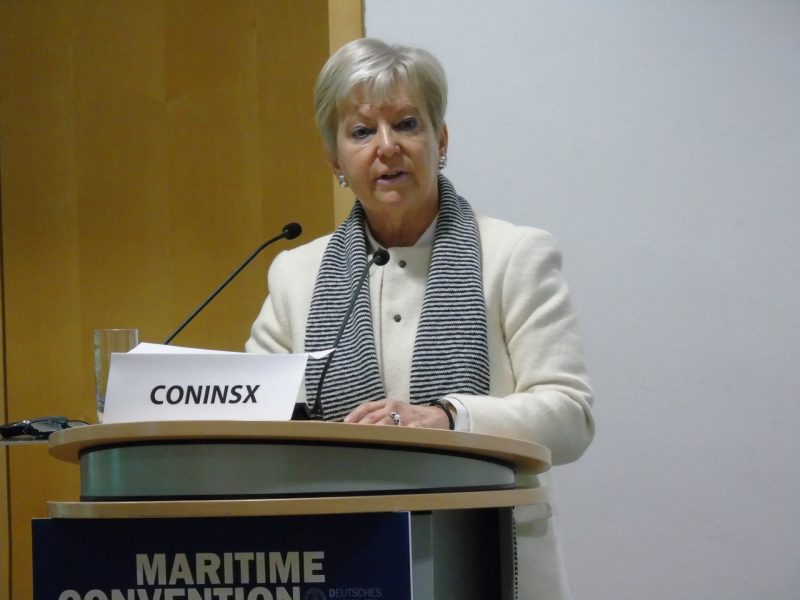 Before addressing my key-note on Europe´s High North, I would like to say a word about the Arctic. The Arctic is one of the most dynamic areas of geo-politics. However, the Arctic is not very well known. When speaking about the Arctic, the image that usually comes to our mind is a polar bear on ice, or on melting ice. What does not come to mind spontaniously, especially when speaking about the European Arctic, is a region with four million inhabitants, with many vibrant cities and communities, with universities and industrial parks, and with a rich historic and cultural heritage.

I will focus my presentation on the following issues:

Why is the Arctic of such importance for the EU – and vice-versa?

It is important for the following reasons:

This is not simply a dogmatic question. It means concretely that EU’s high norms and standards apply to the European Arctic, including to Iceland and Norway that are closely associated with the EU. Examples are high standards in the areas of safety of shipping, off-shore drilling and environmental protection.

Most well-known example is the dramatic effects of climate change in the Arctic and far beyond.  Indeed, the Arctc is warming up two to three times faster than the rest of the world. The warming up of the Arctic – especially the melting of sea-ice, is responsable for 25% of global warming. Because of the warming-up, also land-ice or glaciers are melting. In case all glaciers of Greenland, that is six-times bigger as Germany, would melt, this would heavely impact the rise of sea-levels globally. Some scientists speaking even of an average rise of six meters. Climate change, the warming up of the Arctic causes major problems for the region and its people, such as generating coastal erosion, collapse of infrastructure built on permafrost, and is impacting negatively the live-hood of Indigenous Peoples. The Arctic is also badly affected by pollution originating from outside the region. For example, the Arctic Ocean contains the highest level of micro-plastics of all oceans, mainly stemming from Asia.

But also the EU has a footprint in the Arctic. Many activities in the Arctic have a European dimension: 25% of fish imported in EU is from Arctic; huge amount of energy, particularly gas and oil, stems from the region notably from Norway and Russia; European companies invest in the Arctic – e.g. a major steel-recycling Spanish company in Northern Norway; Finnish company planning a digital sea-cable across the Arctic linking Europe with Asia; German-built wind-farms operating in the Arctic.[1]

Third reason of strategic interest of the EU for the Arctic:  The geo-economical, the geopolitical and security implications of the warming of the Arctic have a direct impact on internal and external policies of the EU.

For all these reasons, the EU has an Arctic Policy – already since 2008, and is strongly engaged in the Arctic.

But first, it is important to place EU’s Arctic Policy in the right setting, notably in the context of EU´s Global Strategy. The EU Global (Foreign & Security) Strategy explicitly states that the EU has a strategic interest in the Arctic remaining an area of low tension based on constructive cooperation – including “solid political and security cooperation”.[2]

EU has an Arctic Policy for more than a decade. The latest is the EU Arctic Policy from 2016: Joint Communication on “An Integrated EU Policy towards the Arctic”. The Overall objective of EU´s Arctic Policy is to contribute in ensuring a safe, stable, sustainable and prosperous Arctic.

A specific objective and one of the three Pillars of EU’s Arctic Policy is to counteract climate change and safeguard the fragile Arctic environment. The Arctic forms part of the EU’s wider efforts to combat climate change. As climate change is a global issue, the EU’s focus is addressing it actively at multilateral level – notably at the UN with the implementation of the Paris Agreement, and by ambitious targets which the EU pursues within its territory.

But the EU has also specific actions for the Arctic under this pillar. For example, the EU is a major contributor to Arctic Research, which is a clear case of international scientific cooperation and what we can contribute to the Arctic. In October 2018, the EU, together with Germany and Finland, organised the Second Arctic Science Ministerial in Berlin, which was a major success. Also EU Space Policies & Programs, such as Galileo and Copernicus, including Copernicus Maritime Surveillance Service, support with their sattelite systems Arctic research, are observing changes in the maritime environment and are contributing to safe shipping.

The Geo-economic implications of the warming up of the Arctic:

The warming-up of the Arctic implies new economic opportunities also for European business and economic operators. Indeed, higher temperatures make it easier to access the rich natural ressources in the Arctic, and opens up “new” sea-lanes in Arctic waters.

New economic opportunities however also contain serious risks and uncertainties as their impact on the fragile Arctic environment and on its people, is unknown.

And here, the EU as well wants to play a key role – in close cooperation with other parties, to ensure that new economic opportunities do take place in a responsible, sustainable way. It is indeed key to ensure a balance between economic development and environmental protection, with taking due account of the rights and voices of the people living in the Arctic.

Examples of new economic opportunities in the following areas:

In brief: the geo-economic implications of the warming-up of the Arctic are clearly implying more fishing, drilling and shipping. Hence, the EU will need in future to better mainstream Arctic specific goals into all areas of EU policies.

Geo-political implications of the warming up of the Arctic.

The step from geo-economics to geo-politics is very small. Geo-political developments in the Arctic are actually the most volatile area.

Examples related to Russia, China and the US:

Given all these developments, the EU will have to address the Arctic from a geo-political perspective, much more than is currently the case.

The implications of the warming-up of the Arctic for Security.

EU Space Programs, such as Copernicus – EU’s eyes on Earth, and Galileo – European own global navigation sattelite system (GPS), both already play a key role regarding the Arctic: Copernicus’ services are monitoring sea-ice for safer maritime transport and hereby provides direct info to the ship’s bridge on concentration of sea-ice, on ice-drift and iceberg movement. This monitoring allows the identification of risks and opportunities.

EU Space Programs provide assistance for navigation through Arctic waters. Copernicus’ data are used for generating high-resolution ice-charts, monitoring and forecasting ice-conditions, hereby contributing to maritime safety. In addition, they contribute in dedecting oil-spills, and assisting in search and rescue operations, which are particularly difficult in the Arctic region.

Finaly and in conclusion:

[1] ENEL Green Power is building by 2021 the biggest wind-farm project in Murmansk, or off-shore wind-farms are being built in the Barents Sea, connecting Norway and Russia.

[2] The EU Global Strategy of 2016 explicitly states:”… the EU has a strategic interest in the Arctic remaining a low-tension area, with ongoing cooperation ensured by the Arctic Council, a well-functioning legal framework, and solid political and security cooperation.”

[3] Shipping traffic along Russia´s Arctic coastline continues to be at an all-time high reaching nearly 30 million tons in 2019, mainly transport of oil, gas and general cargo.

[i] Meanwhile the Council of Ministers of the EU has taken the decision in December 2019, to update EU´s Arctic Policy.